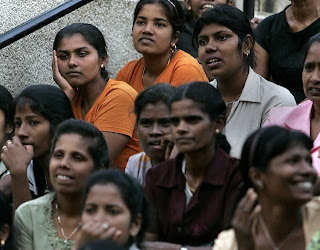 KUWAIT: She only dreamt of buying a new home for her mother. However, it remained just that - a dream. Instead of earning a cozy job, good salary and savings she fell into the clutches of a cruel and merciless employer for over 13 years without pay. Fifty seven year old Kamalawathie Katawala has been working for her sponsor since 1997. (Kuwait Times had reported yesterday that she worked for 17 years. However, the Colombo government's records show a 13 year time period). She landed a job in Kuwait befo
re the Gulf War in 1990 - at first working for an Egyptian family. During the war, however, she ran away with her Egyptian sponsor to Jordan. At the peak of the war, she was told to go back with her family to Sri Lanka and wait there until the war is over. She did return to Sri Lanka, but the promise of Egyptian sponsor who would take her back to Kuwait, never materialized.

Struggling to accomplish her dream of buying a house, she embarked on another overseas challenge. She obtained a new visa for Kuwait job. This time, she ended up working for whom she calls 'merciless employers' in Jahra. Between stifled sobs, Kamala narrated her ordeal to the Kuwait Times through an interpreter as she could only communicate in Arabic and her native Sinhala language.

Three days after arriving from Sri Lanka, I almost gave up. They beat me; I sustained bruises, my head was also hit. They told me to continue working with them. I cried hard every day but nobody listened. I stopped crying and accepted my fate," Kamala narrated her story.

She asked for her salary, a month after her arrival, "They asked me why I needed money. For what? I told them because I was working to earn money. But they mocked me," she said. "From then on, the same story was repeated every month. I would ask for my salary but I would never get any. They said they have no money. I really believed that since they did not have any air-conditioning facilities installed at home. I would sleep on the floor at night. I would place wet towel on their beds for cooling. I did th
e same to the place where I would sleep," she said. These living conditions changed after a few years, she recalled.

After two years, I tried to escape. I went out, hid in the car with my bag. But when I tried to cross the street, they saw me run. They quickly grabbed me, beat me up again and locked me inside the room for one day. They warned me against trying to escape again. They said they would kill me. So from then on, I didn't even try to escape anymore," she sobbed.

She explained that she was forced to obey strict orders. "I also stopped asking for money because I was really afraid," she said. Kamala is not aware of the number of years that have elapsed since being 'employed' with her sponsor. She has lost count of days and months and remembers having tried to place an unsuccessful phone call to an acquaintance in her home town of Avissawela. Kamala is partially literate, she can count and read numbers.

A few months ago, a compatriot named Guita arrived at her sponsor's home to work as a domestic helper. She suffered under the same appalling conditions. Also, whenever Guita inquired about Kamala not being allowed to leave on vacation, the sponsor would lie, "They told Guita that I don't like to leave their home. They told her that I was sent to the airport many times but I would refuse to board a plane. But those are lies. I was never allowed to go to the airport; not even once," she told Kuwait Times.
So when Guita planned to escape, I asked her not to leave me alone," she said.

They finally snatched a life-changing opportunity on June 26, "We walked out and hid between passing cars so as to avoid being caught by our sponsor. When we reached a co-operative society, Guita asked me to hide behind a bush. The plan was to hire a taxi that would take us to the embassy. I waited for long until I gave up and hired one on my own. I thought that our employer had caught her," she said.

But an hour later, Guita arrived at the Sri Lankan embassy, pleading with authorities to help Kamala. She was oblivious to the fact that Kamala was already there. Both were reunited at the embassy's premises. At the time of writing this, Kamala is still unaware of the fact that her mother whom she loved dearly had passed away almost a year ago. The information was relayed to Kuwait Times by a Sri Lankan embassy official who had contacted Kamala's family. She looks forward to returning to her family - to b
e with her mother, two brothers and two sisters. She acknowledged that her dream to build a home for her mother was never fulfilled. The Sri Lankan Ambassador to Kuwait Sarath Dissanayake has promised to resort to proper legal channels to resolve Kamala's issue.
http://www.kuwaittimes.net/read_news.php?newsid=Nzk0Nzc4MTQ=