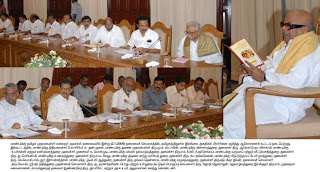 தமிழ்நாட்டில் தங்கி உள்ள  ஈழத்தமிழ் மாணவர்களுக்கு இதுவரை காலமமும் உயர்கல்வி அனுமதியில் இறுதி வந்த தடை தற்போது நீக்கப்பட்டுள்ளது.
The higher education ministry has issued a government order dated June 29 which says: "Under the prevailing circumstances, children of Sri Lankan Tamil refugees who have studied in schools in Tamil Nadu and have scored very high marks are unable to join in preferred engineering colleges. The government believes that it would be only proper for such candidates to participate in the single window counselling (for Tamil Nadu Engineering Admissions) along with other students according to a merit list prepared on the basis of their (Plus Two) scores under the general category."

Accordingly, such candidates will be allowed to attend the single window counselling and choose a seat in a favoured branch of study in a preferred engineering college for the academic year 2010-11. "The GO issued by higher education principal secretary K Ganesan has been communicated to the authorities of the Tamil Nadu Engineering Admissions (TNEA 2010)," a government official said.

It is learnt that more than a dozen Sri Lankan Tamil refugee students, who had passed Plus Two through regular schools, have applied for the TNEA 2010. These students will be issued call letters and permitted to attend the counselling according to the general merit list.

Refugee students, who had hitherto not applied for the TNEA 2010, could be allowed to participate in the supplementary counselling to be conducted at a later date.

In recent years, there have been several representations from the Tamil refugee community and civil society urging the government to allow these students to join engineering colleges like their Tamil counterparts in India.

Last year, the government had instructed the directorate of technical education to admit Sri Lankan Tamil students who were residing in refugee camps and outside only against vacant seats at the end of the main counselling.