Kerala ..We have more in common with South India than India! What Comrade Nambiar says? 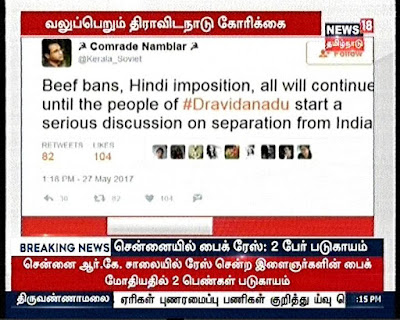 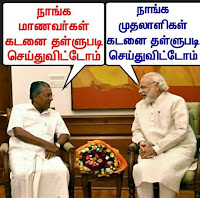 Malar.Evera: Comrade Nambiar
1. We are Dravidians as a Race not of any Aryan disposition. We have more in common with Tamil Nadu and Sri Lanka than India
2. We never faced any major violent incidents and genocides since the existence of the major empires

3. All Religions that came to #Kerala, came peacefully. More importantly, the Religions got subsumed under the Parochial Identity.
4. "Hindus" in #Kerala are NOT the same as Hindus in North India. We don't do Holi, Diwali or any Upper Caste, Brahminical festivals.
5. Muslims in #Kerala speak Malayalam. Speak in Hindi or Urdu and they wont understand you. The allegience is to the Malayalee Nation first!
6. Christians in #Kerala are not one block. Not all are Roman Catholic. In fact Protestant sects are more populous, making it seem Anarchic!
7. Keralites and Tamils are one people from food to interoperability of languages. We have more in common with the Tamil Nation than India
8. Keralites are a stubborn, antagonistic, rebellious lot by nature. Impose something on us and we want to destroy it.
9. Our women are the fiercest people you will come across. #Kerala comes from the Matriarchal legacy. Women held economic & political power
10. #Kerala loves Communism. It was built by it and prospered. Che & Lenin are bigger icons than actors. And we still make Communist movies

11. #Communism gave #Kerala independence, literacy, equal distribution of land, destroyed caste hegemony, empowered the working classes
12. #Communism also freed Malayalees from the shackles of Religion - no matter what religion you individually followed
13. We have along way to go before the stain of the Hindu Caste system is destroyed but we are the state with the lowest attacks on Dalits.
14. In #Kerala, Muslims didn't take cover of Religion for Political Identity, they walked hand in hand with the Communists.
15. The Hindu Terrorist RSS is like ISIS and Al Qaeda for us. From bombings, killing children, to planning riots, they have done it all.
16. The only group that gives it back to the RSS in #Kerala are Communists who have protected minorities in #Kerala and paid in lives!
17. Our CM Com. Pinnarayi as a party Cadre himself stood guard at a mosque against RSS attacks!
18. However, we are a fun people too. We have a fake religion just for the purpose of making fun of religion. Its called Dinkoism
19. When the LDF won the elections, in Dubai the Communist Flag was hoisted …Underwater!
20. You may not have a Mallu surname, you may be white as chalk and hate beef. But talk to us in Malayalam, and our hearts melt for you
21. India, #Kerala is a separate Nation co-existing peacefully but try any colonial shit with us and we will fight back, and end you
22. #Kerala is the Secular, Socialist land India could never become. Mess with this ethos and we will Revolt for a #DravidaNadu. Lal Salaam!
A post by a keralite