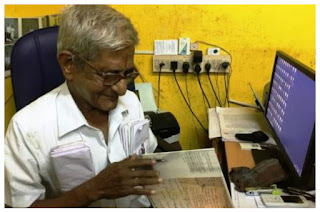 Govt can sue me, I am not scared of going to jail', Traffic Ramaswamy declares -
www.thenewsminute.com
He is 83 years old and has filed over 400 public interest litigation in the past two decades. He says 'he is just 83 years old' and seems unperturbed by the latest complaint filed against him. This time, it is CM Jayalalithaa who has filed a defamation case against him for allegedly spreading messages about distribution of flood relief material on WhatsApp.

Traffic Ramaswamy says he will not withdraw or apologise for his WhatsApp audio. "I have spoken only the truth. This was not a natural disaster, it was a man made one. The state cannot get away with claiming that the rains alone caused the flooding. The DMK and AIADMK have done a lot to bring the state to this condition, especially the AIADMK," he says.

A case was filed by city public prosecutor ML Jegan on Monday at the principal sessions’ court.
With what proof did he decide to go against the government? "Proof? This was murder. All those people who died in floods were actually murdered. The political parties have to be taught a lesson and I am brave enough to do that. I am ready to go to jail again, I don;t mind dying. But I will do what I feel right," he says.
In March this year, Ramaswamy was arrested by the Chennai police over a complaint by a hotel owner Veeramani that the veteran activist had threatened him.
Ramaswamy who was in the midst of removing unauthorised hoardings on a road in Chennai, got into an argument with Veeramani over complaints that he was blocking traffic while giving an interview to a television channel.
He was later released on bail, after the court questioned the necessity of the arrest at 4.00 am.
On allegations that he was filing cases against the AIADMK government at the behest of the DMK, he said, "The AIADMK can allege that now as they are at the receiving end. But I have filed many cases against DMK too. My fight is against politicians who are ruining this country. All of them are ruining this country. Aren't they?" he asks.
Ramaswamy says the state is feeling threatened and that's why they chose to file a complaint against someone like him. "The other day around 5,000 people came together in Chennai asking for a political change. They all want Sagayam IAS to join politics. Parties like AIADMK feel threatened now."
As he signs off, Ramaswamy valiantly declares that he will fight the defamation complaint and salutes all those who stood by him.
This is not the first time Chief Minister Jayalalithaa has filed a defamation case. Till July 2015, about 112 defamation cases were filed by Jayalaithaa against rivals and media.
On November 24, Jayalalithaa had filed criminal defamation cases against DMK chief M Karunanidhi and the editor of Ananda Vikatan for allegedly publishing defamatory articles against her.
An article published on November 21 in the DMK mouthpiece 'Murasoli' spoke about the achievements of the Government in the past four years which led to filing of case against Karunanidhi and the Tamil daily's editor, printer and publisher of 'Murasoli', S Selvam. Another article 'Tantri- Mantri' published in Tamil magazine Ananda Vikatan was blamed of maligning the reputation of Chief Minister and a case was filed against editor R Kannan and printer Madhavan.
In July 2015, she had also filed a defamation case against a Tamil magazine Nakkeeran and also an online portal Rediff.com for writing about her health conditions. She had also filed a defamation case against BJP leader Subramanian Swamy for a ‘malicious tweet’.
- See more at: http://www.thenewsminute.com/article/govt-can-sue-me-i-am-not-scared-going-jail-traffic-ramaswamy-declares-37004#sthash.oYj8mVEh.dpuf